Elysium Theatre
A taster for WHO ARE WE? WE ARE, a production that combines stories within stories, within stories; Indigenous stories, people with disabilities, disease, stories of homelessness, refugees, migrants, courage, dreams and hopes. There are stories of mentors who have been confronted and humbled by their experience, stories of how we consolidate as a community and ultimately, as a society.
Narratives of Hope Ensemble (NOHE) emerged from the community owned program, Narratives of Hope, which has used the platform of storytelling to build new communities of understanding, to change perceptions about ‘the other’ and to create a more hopeful and peaceful future for all, including wider community. This has allowed participants to self-advocate and advocate on behalf of their communities through digital media, art or public speaking. Sharyn Henry from ELYSIUM THEATRE worked with participants of the program and mentors to develop a performance using Brown Paper Puppets, as another way of storytelling that is not confronting for the participants or the audience and which still allows the individual to have a voice.
Sharyn Henry ​as Candy director and performer in VELVET CELLAR CABARET at Music By The Sea Festival 2009.
​Many thanks to Alex Mauritz for recording and assembling video.
​​AN ALAN BENNETT EVENING -  A Chip In The Sugar & A Lady of Letters (BY ARRANGEMENT WITH ORiGiN TM THEATRICAL, ON BEHALF OF SAMUEL FRENCH, LTD.)
Graham Whittaker - (Toby Chittenden) finds life becoming complicated as his mother, with whom he still lives, reunites with an old flame, Frank Turnbull. Graham becomes increasingly disturbed as Frank, whose outspoken, right wing opinions, conflict with Graham's muddled liberalism as Frank becomes an ever-increasing influence on Vera.
Irene Ruddock (Sharyn Henry), is a single, middle-aged woman, who loved and cared for her elderly mother until her passing. Irene observes the world from her window and is not afraid to speak/write, her mind. Frequent letters to anyone and everyone, to remedy the social ills she sees around her, ultimately land her in prison.
​Sharyn Henry as Shirley Valentine offers a unique look into family culture, where duty and tradition come before desire and passion. Set in Liverpool in the mid-1980’s and taking the form of a monologue, Shirley Valentine focuses on the life of Shirley Bradshaw (née Valentine) before and during a transforming holiday abroad.
Unplugged Cafe - Educating Rita snippets
​Unplugged Cafe fun with Patsy Schmatsy - Sharyn Henry (Apologies for poor sound quality)
Unplugged Cafe 10th Anniversary - The Unfortunate Adventure of Amorous Amanda. First performed at the very first Unplugged Cafe - Toby Chittenden performer, Sharyn Henry writer/narrator (Apologies for poor sound quality)
Giant Steps is a large scale outdoor Art installation by Suisse based artist, Viliam Mauritz.  The installation is a construction of two giant-sized foot prints. Each ‘footprint’ is 100 metres long, 45 metres wide and 4 metres high. The installation will take place on the tidal sands of Sandgate beach in north Brisbane, Australia. It will be constructed by placing 400 prepared bamboo poles, in the sands at low tide. Sharyn Henry ​is Project Manager for this amazing Outdoor Art Installation by Viliam Mauritz, to take place on 10th to 11th October, 2015 on the tidal sands at Sandgate, Brisbane. The artist explains, “As humans we are hampered by our own perspectives.  If I had to express my project in one word, I would say it is about ‘questioning.’  What do we leave behind us?  What do we destroy?  Where are we going?  What do we do in order to get out of the maze in which we live?  How do we ‘get the whole picture?’  A footprint is a very simple and genuine image.  It is universal. Click here Giant Steps if you would like more information. 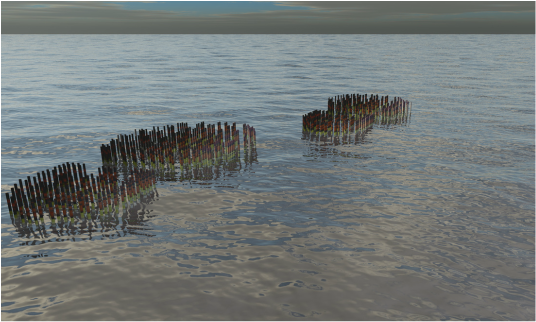